On June 29, Thuza and Kusasa, the first white rhino to be back in Hwange National Park in nearly 20 years, made some important first steps, another success and another turning point for both our rhino and the African rangers.

For a few days, the gate between the habituation boma and the wider sanctuary was left open, inviting the two bulls to take a step outside and venture into the wider sanctuary area. But they were not moving out. Instead, they continued to show up for their morning feed but seemed reluctant to pass the gate and explore the rest of their new home. 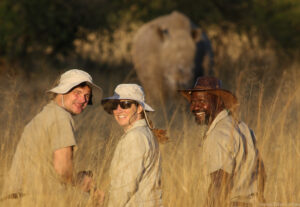 Finally, on June 29, Thuza led the way out of our smaller habituation boma, following the scent of lucerne and hay, molasses and grass. The Cobra scouts strategically placed the food just beyond the gate, tempting the rhino out. Once Thuza realised the coast was clear, he continued eating outside the habituation boma, and Kusasa soon followed. And then, they were gone.

Marching through the wider sanctuary, the rhinos started exploring their new area, with the Cobra scouts in close range but at a safe distance, trying to keep up. Finally, they found the Camelthorn trees surrounding Imvelo’s Camelthorn Lodge and seemed to enjoy the shelter from the wind. Now, the Cobras Community Wildlife Protection Unit’s job begins.

It’s been emotional so far, and the rhinos’ journey continues as they now explore their new home beyond their original boma. Taking guests on close-up walks with the first two rhinos is thrilling for all who have enjoyed the new experiential activity while staying at either Bomani or Camelthorn Lodges, part of the Imvelo Safari Lodges Hwange circuit. 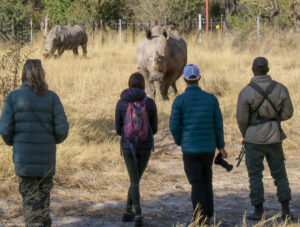 Africa’s Eden is proud to announce that Imvelo Safari Lodges has successfully introduced white rhino back into Hwange National Park after nearly 20 years!

After a journey of 17+ hours and 700+ kilometres across Zimbabwe, the first two white rhinos to roam Hwange in nearly 20 years are now settling into their new home in the Imvelo Ngamo Wildlife Sanctuary bordering the park. 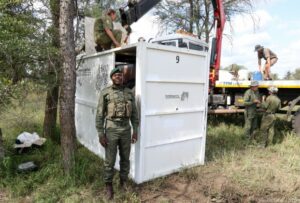 The two rhinos, Thuza and Kusasa, were named by two generous donors from a list of options put forward by five community leaders. Thuza means ”to charge or strike” in Ndebele, alluding to the rhino’s powerful physical and symbolic position. Kusasa translates to “tomorrow” in Ndebele because these rhinos represent a bright future for village children and grandchildren.

Decades ago, finding a white rhino in southern Hwange was almost guaranteed; however, the last rhino was sighted here around 2005. The good news is that years of discussions, dreams and plans have culminated in returning the first two white rhinos to the Hwange area!

White Rhino and Conservation in Hwange

CRCI and the establishment of the Imvelo Ngamo Wildlife Sanctuary would not have been possible without a long-standing partnership with the local community, the District Council, National Parks, the Malilangwe Trust, an essential network of donors and a host of other organisations. Funds generated from white rhino tourism fees will return to the communities to help sustain socio-economic and conservation development.

Some of the wide-ranging and far-reaching benefits of this project include: 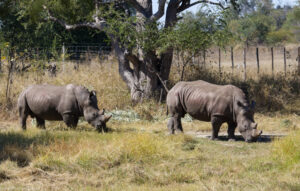 Fanfare and celebrations are ongoing to celebrate the arrival of Thuza and Kusasa. Expectations have been high among the communities, and the culmination of years of planning and work has been met with joy, hope and excitement.

Guests staying at Imvelo’s Bomani or Camelthorn Camps will have the opportunity to potentially see the Big 5 – something not possible since 2005! This is an incredible achievement for Hwange, Imvelo and future safari-goers searching for a meaningful impact on local communities and groundbreaking conservation initiatives.

If you would like to check out the journey of Thuza and Kusasa and learn more about this meaningful project, please visit www.hwangecommunityrhino.com.