Self-Drive Along the Zambezi

More than any of its other Southern African neighbours, Namibia lends itself to the perfect self-drive safari – especially along the Zambezi!

One of the reasons that self-drive is such a popular option in Namibia can be summed up in one word: diversity! Namibia is not JUST a safari destination. Namibia encompasses iconic wide-open spaces, breathtaking landscapes, arid deserts, culture, history, wildlife and the lush riverine environs of the Zambezi.

Namibia is sometimes considered ‘Africa for beginners’ – the roads are in good condition, the infrastructure is well maintained, and there is widespread cell phone reception. Everything to set your mind at ease while you set the pace and tone of your African sojourn! The Zambezi region in Northern Namibia is still largely unexplored. Before the global pandemic, only about 16% of visitors to Namibia ventured this far north. However, the Namibian panhandle should certainly not be overlooked!

The Zambezi region stretches more than 200 miles (350 km) east towards Zimbabwe and Zambia, creating the only quadripoint in the world as the international borders of Namibia, Zimbabwe, Zambia, and Botswana meet in the Chobe. What’s more, is that the Zambezi region boasts:

Before 2013, the Zambezi region was known as The Caprivi Strip, so you may still find people referring to it this way. The region officially joined Namibia in 1968, two years after Namibia gained independence from South Africa. Over the last decade, massive infrastructure development in this region has ensured that all the main roads traversing the Zambezi have been tarred, making for easy access to some of the most pristine wildlife areas left in Southern Africa.

In the heart of the Zambezi region, you find the Wild Waters Group, comprising of three properties:

Nkasa Lupala and Jackalberry Tented Camps are located inside Nkasa Rupara National Park. Serondela is situated 17kms outside Kasane town, on the Namibian side of the Chobe River and overlooking the Chobe National Park. 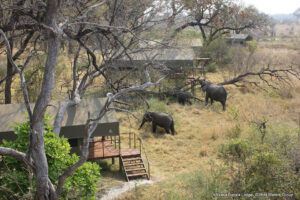 When the Micheletti brothers first built Nkasa Lupala Tented Camp in what was then called Mamili National Park, the area was only accessible in the dry season. Now known as Nkasa Rupara National Park, the site sits at the confluence of the Kwando and the Linyanti river systems. When the seasonal flood waters come from Zambia and the Angolan highlands, this entire area becomes a miniature delta. In years past, all the roads used to flood, and bridges washed away or became submerged. However, thanks to the infrastructure and development by the brothers, Nkasa Rupara National Park is now accessible throughout the year.

The beauty of Jackalberry Tented Camp, in particular, is the unique feature at its heart. The camp is built around a massive Jackalberry tree and rises three stories, offering magnificent views over the plains and waterways below. Because of its location, 13kms away from the park entrance, you are further into Nkasa Rupara National Park than any other visitors are able to venture. 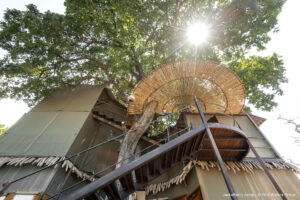 Because of the location of these three properties, they are the ideal add-on to any holiday in Africa’s Eden region, either connecting Namibia with Botswana, Zambia or Zimbabwe or, indeed, the other way around.

The Zambezi Region offers a very different visage to the rest of Namibia, with its lush green reed beds, flood plains and permanent waterways. This magical corridor will inevitably find a place in your heart and make you yearn for a Zambezi sunset!