Who is your favourite peaceful, gentle giant? We would hedge our bets that in the animal kingdom, many of you would say the giraffe. But do you genuinely appreciate this remarkable creature? Here are 9 interesting facts we bet you didn’t know about giraffes.

The real height of a giraffe

Giraffes are the world’s tallest mammal. A fully-grown male giraffe can reach the heights of 5.9 m, allowing them to reach and eat the tallest leaves from their preferred Acacia trees. For comparison, the Guinness Book of Records lists the tallest human male ever confirmed at 2.72 m (8 foot 11.1 inches). 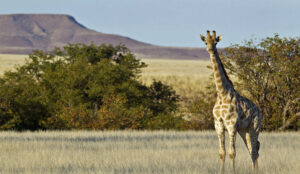 Did you know that giraffes barely sleep? Giraffes will stand most of the day. They will even stand while sleeping. However, giraffes only get about 30 minutes of shuteye in 24 hours, a figure much shorter than a human’s sleep requirement of seven to nine hours of sleep daily.

A Group of Giraffes

How can you tell male and female giraffes apart?

Unlike most mammals, it can be challenging to tell a male from a female giraffe at first glance. However, apart from the obvious, there is another way to determine a male giraffe from a female. Both genders have horns; however, the top of males’ horns are white since they do not have hair on top of their horns due to fighting. Females have a bush of hair on top of their horns, scientifically called ‘ossicones.’

Giraffe and human necks are similar

Giraffes have seven vertebrae in their neck, which is the same number of vertebrae as humans. However, giraffe vertebrae can be up to ten centimetres long, whereas an average human vertebra is less than 2 cm.

Giraffes are known as ‘gentle giants’ because they are very calm animals. Even though they are one of the largest mammals, their personality tends to be docile, and males will only fight with each other during mating season. Males fight by locking and swinging their necks while also kicking forwards and backwards, which is a real spectacle to witness. 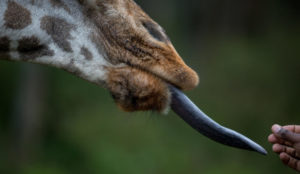 Giraffes have a tongue that can reach the length of 45cm! They browse from tall trees, most of which are thorny acacias and an extra-long tongue can help the giraffe manoeuvre around these thorns to get the leaves they want without pricking themselves.

However, this isn’t even close to the longest tongue in the animal kingdom. That specific honour goes to the little friendly chameleon with a tongue averaging 120 cm! According to the Guinness World Records, the longest human tongue ever recorded was 10.1 cm.

Like zebra, leopard and cheetah, no two giraffe’s spots look the same. Each giraffe has entirely unique spots. There are nine giraffe subspecies, some darker in colour and some lighter, but none with the exact same markings or spots.

Have you ever seen a giraffe drink? It is a rather comical but awe-inspiring sight. Even though they have a long neck, it is still too short to reach the ground. So, to drink from a watering hole, the giraffe spread their two front legs apart, ensuring enough space for its neck to come to the ground to drink. Luckily, they don’t need to be in this awkward position very often. Instead, giraffes only drink every few days as they get most of the water and nutrients they require from the leaves and shrubs they eat.

We hope you’ve learned a thing or two about giraffes. The soft nature and a uniquely proportioned body make giraffes a sought-after animal on any safari bucket list when visiting Africa’s best national parks.