Do Elephants Get Drunk? Fact or Fiction?

Imagine sundowners under an African sunset. You and a group of your friends watch the sky turn a fiery red as you enjoy a sundowner cocktail. Idyllic, right? Well, for the African Elephant, getting drunk in the bush is apparently a common occurrence.

Tales of inebriated elephants swaying uncontrollably after gorging themselves on marula fruit go back more than a hundred years. However, scientists have gone back and forth about whether the story of the drunken elephant is more tale than truth. So, let’s dive in find out: do elephants get drunk? 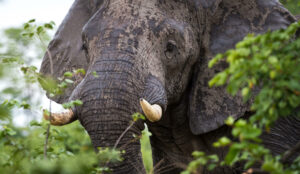 Where did the Alcoholic African Elephant story begin?

Way back in the 19th Century, a French naturalist wrote of African Elephants who experienced a “gentle warming of the brain” from eating fermented marula fruit that had fallen on the floor. His writings were inspired by the accounts of the indigenous southern African people, the Zulu. They spoke of witnessing the gentle giants stumbling after they imbibed on one fruit too many.

Then, in 1974, the award-winning documentary “Animals are Beautiful People” depicted different animals, including the African Elephant, drunk on fermented marula fruit. As entertaining as the footage is, many have questioned the film’s authenticity. Some have even gone so far as to accuse the filmmaker, Jamie Uys, of playing bartender and soaking the fruit in alcohol before feeding it to the animals.

The marula tree has been colloquially dubbed “The Elephant Tree” because of the African Elephant’s great affinity for the fruit it bears. Between the months of December and March, certain areas in southern Africa see this tree burst with bright yellow fruit. One such area that grows this special tree, is the South Luangwa National Park in Zambia. This lush park is home to an incredibly diverse selection of wildlife: from lions and leopards to over 400 species of bird.

The park is peppered with the marula tree, a tree of great significance to southern African people. The tree has been linked to fertility and long-lasting marriage, but it is also used to make traditional beer. When the marula fruit ferments, it can contain a fair amount of alcohol. The fermented fruit is crushed and mixed with a little bit of water. The pip and pulp are removed, and the liquid is covered and left for a few days. Et Voila, bottoms up! 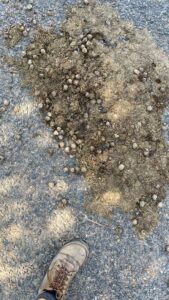 Do Elephants Get Drunk? The Great Alcoholic Elephant Debate:

In 2006, scientists at the University of Bristol debunked the story of the drunken elephant. They contended that an elephant would have to eat 30 kilograms of marula fruit to get intoxicated. That would be quite the ask!

Recently, new evidence suggests that scientists may have been mistaken in their previous findings. The study looked at how specific mammals metabolised alcohol and found that elephants are much less efficient at breaking down ethanol than humans are. Comparing human reactions to alcohol with elephant reactions to alcohol would be like having a drinking contest between an Irishman and, well, anybody else. 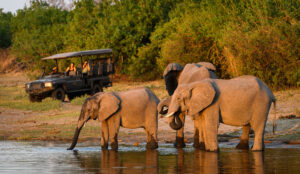 What is the consensus on African Elephants Getting Drunk?

While the idea that humans and elephants react to alcohol in the same way has been debunked, it cannot be said with absolute certainty that the marula fruit is the reason for the strange behaviour of the African Elephants. The most likely answer is that the elephants are reacting to eating beetles which live inside the marula bark. The San people traditionally used the same beetles to poison their arrows, so the elephants may be reacting to the poison.

It would seem that the real reasons for the stumbling elephants are more complex and less fun than the story of the drunken elephants. In any case, the videos circulating on the internet of the befuddled behemoths are entertaining and quite endearing.

Inebriated or not, it is an awe-inspiring experience to witness these beautiful creatures where they thrive: in places like the Chobe National Park in Botswana, for example, which hosts the largest concentration of African Elephants in the world.

And if elephants are not, in fact, enjoying sundowners in the African bush, then we all might as well be doing it for them! 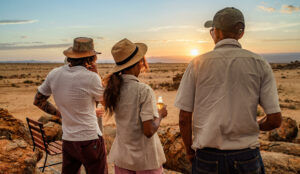